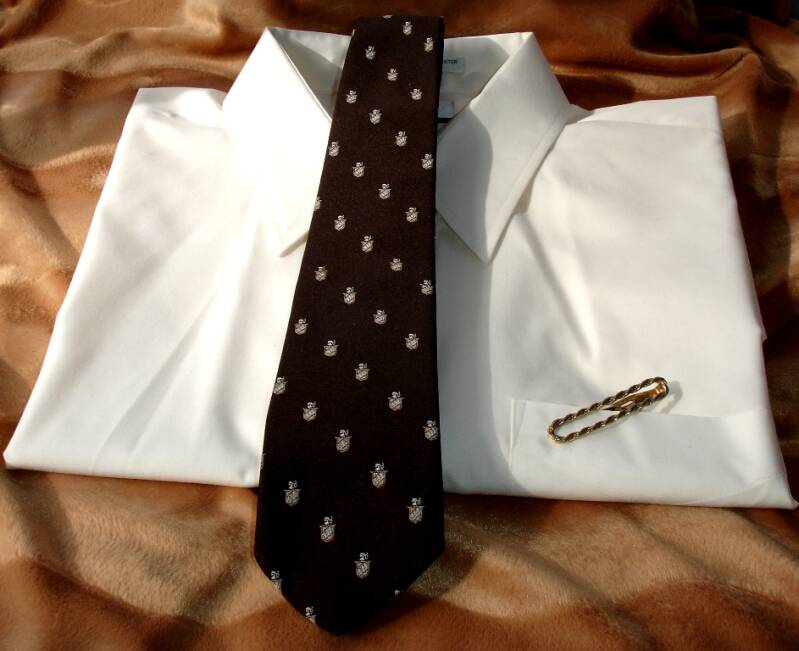 This Austin Reed dark brown men's vintage tie with silver and gold shields measures 55" in length and 3" across at its widest point and has no stains, pulls or tears, only some minor wrinkling in the area where the knot would have been made. It still has its original label which reads "Austin Reed of Regent Street - London".

This Austin Reed dark brown men's vintage tie with silver and gold shields is in excellent condition and has been well cared for in its lifetime. It originally belonged to a local professional man who was an avid tie collector for years. We acquired much of his collection from his estate. The ties range in date from the 1950's through the 1980s.

Listing is for tie only! Shirt and tie clip are used for display only!

Brief History of Austin Reed:
Austin Reed started his business in 1900, on Fenchurch Street, as a single shop in the City of London and over the years has transformed itself from a traditional business into a dynamic and progressive group, with over 70 outlets in the United Kingdom and with international licensees across the globe. Austin Reed started to build what was the beginning of Austin Reed today by opening branches in Regent Street .

The 1920s, saw an amazing decade of growth in London which was led by the 'centennial redevelopment' of Regent Street the location of Austin Reed flagship store. By the 1930s, Austin Reed had built a firm business that was becoming a national chain. Austin Reed became a household name because of its complete dedication to top notch service with its tagline, "It's just part of the Austin Reed service," which became a national catch phrase.

The 1940s, of course was marked by the Second World War during which time Austin Reed manufactured uniforms for both male and female soldiers. The company's most famous customer was Prime Minister Winston Churchill.

The 1950s, was the time when Austin Reed company was celebrating its golden jubilee. Austin Reed was retired as chairman however he was still very much involved. The company's main focus was to increase production, which was accomplished through modernizing the business in term of stock control, production, and managing the business portfolio and investments. Focusing on building a modern business continued through the 60s and 70's and then eventually led to the expansion of women's range in the 1980s.

If you have any questions, please send us a message prior to purchase and we will be happy to help you.